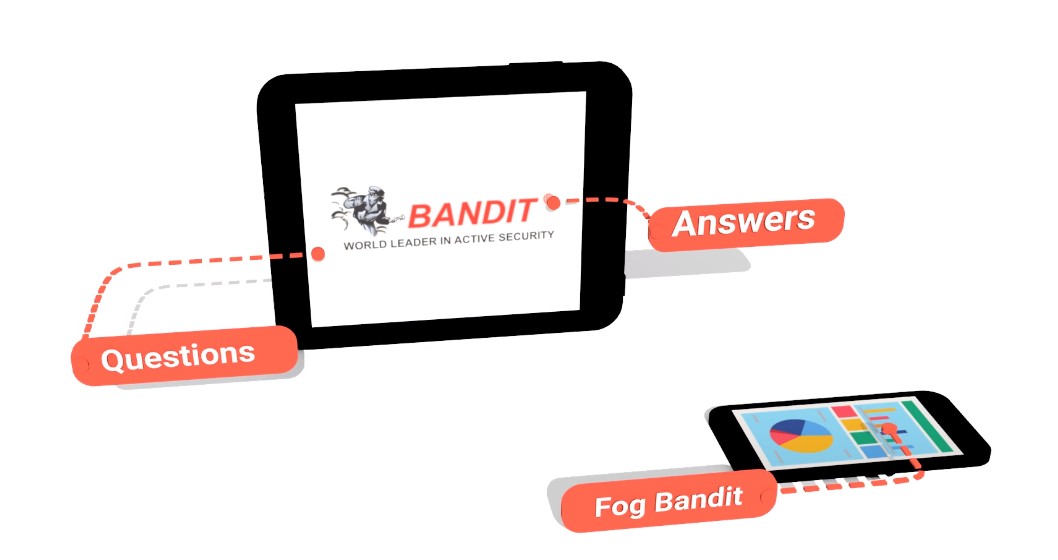 Can the FOG BANDIT be used in small rooms and would that be cost effective?

Bandit have great experience in fogging relatively small areas, in one case we have supplied a
leading ATM provider with Bandit’s for over 400 of their small shop/ATM bunker sites.

With the Bandit being the only system using a Patented, pre-pressurized cartridge (not pump driven)
the following benefits were observed:

Instant activation (just 0.1 second delay between intruder detection and fog ejected at full output
capacity of 28 cubic metres per second) meant that there was no time for an intruder to approach
the fogging unit and smother it/divert the fog or attempt to damage the unit. Pump systems can
take several seconds to prime before activating thus giving the intruder such opportunities.

One Bandit fog cartridge has the capacity to provide up to 25 activations in small volume (circa 50
cubic metres) rooms.

One fog cartridge has a four-year life span unless depleted in the meantime (open fill pump systems
require an annual fluid flush-out and renewal).

A room of such a small size means the fog dissipates more quickly through the point of entry thus
the Bandit’s ability to continue re-activating if an intruder is re-detected was of immense importance
considering the cash levels often held in their ATM’s.

The Bandit’s 24/7 self-diagnostic status checks meant that if any area of the Bandit failed this would
be instantly be reported (an extreme rarity!) and thus rapidly rectified.

How does the FOG BANDIT security fogging system work?

When the patented BANDIT system is activated a special liquid, formula is heated and ejected under
high pressure. As it ejects it instantly vaporises into a thick, dense “fog” which quickly expands to fill
the area being protected.

The HY-3 Cylinder Pack is a clean filled and hermetically sealed unit. The fluid is thus retained in an
oxygen free, pressurised, pH stabilised, de-ionised environment so it does not degenerate thus
proving a 4-year, maintenance free lifespan unless depleted in the meantime as follows:

A full HY-3 Cylinder Pack can generate a minimum of 50 seconds worth of high-density fog (reduces
eye to object visibility down to 25cm) at a rate of 28 cubic metres a second with a maximum single
activation time of 18 seconds. The BANDIT is thus present according to the size of room being
protected i.e., a 56 cubic metre room would be pre-set for a 2 second (56 ÷ 28 = 2) burst or a 504
cubic metre room for the maximum 18 second (504 ÷ 28 = 18) burst. One HY-3 is therefore capable
of anything between 3 and 25 activations before requiring replacement. An exchange refill service is
provided by your BANDIT dealer.

Is the fog safe to use in any environment and will it leave a residue?

The Bandit has been in use for nearly 20 years now and in that time, there has NEVER been a claim
for health, residue or contamination problems.

The predominant reason for this is that just ONE millilitre (one thousandth of a litre) of the fog fluid
(mainly a mixture of water & food grade glycol) produces ONE THOUSAND litres of fog. The
concentration levels are therefore so infinitesimal that the fog itself has been certified, by an
officially recognized testing laboratory, to comply with European Indoor Air Quality Regulations and
is not only harmless generally but also totally safe to breathe.
The fog is created by evaporating a specially glycol solution.
Glycol, classified as a food ingredient, is found in many everyday substances such as deodorant and toothpaste.

The advanced technology incorporated in the Fog Bandit precisely converts 28 millilitres of fog fluid
per second to produce 28 cubic metres (28,000 litres) of fog with a density level (eye to object
visibility range) of no more than 30 cm. So, a Bandit installed in a 280 cubic metre room would be set
to activate for precisely 10 seconds to produce the required 280 cubic metres of security fog.

Over the years the Bandit has been used in all forms of applications including protecting sensitive
electronic equipment (including main-frame servers using sensitive optic-fibre connections),
pharmacies, antique shops, jewellery shops (stocking precious metals and stones) and high fashion
stores such as Louis Vuitton & Hermes (stocking v. high quality textiles) which have all used the Fog
Bandit with no detrimental effect.

I don’t have an intruder alarm installed at my premises – can the FOG BANDIT system work independently?

Yes, the BANDIT can be easily configured to work as a “stand alone” system, as well as working in
conjunction with a conventional intruder alarm system.

Can I be sure the FOG BANDIT will work with my intruder alarm system?

Yes, the BANDIT can be configured in several different ways, to allow for differing types of intruder
alarm panel signals.

Can the FOG BANDIT be used for robbery as well as burglary protection?

Yes, the BANDIT can easily be configured to operate for robbery use only, burglary use only, or both
options together if required.

Can a FOG BANDIT protect rooms over 504 cubic metres in size?

Yes, for areas over 504 cubic metres as many BANDIT units can be linked to function in unison as
required.

I already have a good intruder alarm system – why do I need a FOG BANDIT?

Statistics indicate that most burglaries and robberies are completed within just a few minutes, whilst
sheer logistics dictate that it typically takes much longer than this for the police or other security
services to respond.

During those first few minutes or the so called “window of opportunity” an intruder can operate
virtually unhindered, unless there is some means of preventing this such as the BANDIT.

The BANDIT security fogging system instantly delivers a visually impenetrable curtain of “fog” the
moment an intruder is detected so as to deter them from progressing with their intended crime –
“what can’t be seen can’t be stolen!”

What makes the FOG BANDIT security fogging system so different to other available systems?

It has also been specifically designed from the outset to be more durable, more reliable, have fewer
moving parts yet be competitively priced. It also has an in-built self-diagnostics system to warn of
potential irregularities which could cause the system to fail and a self-cleaning system to alleviate
problems of nozzle clogging. The life expectancy of a Bandit system is 15+ years.

Could an intruder disable the FOG BANDIT in some way, so preventing it from operating?

This is extremely unlikely as the speed at which the fog is ejected (jetted over 6 metres in the first 2
seconds alone!) makes it impossible for an intruder to approach the system.

Also, when installed the BANDIT is typically mounted inside the area to be protected with
appropriate detectors activating it well before an intruder can approach the unit. Then, due to its
high power, horizontal fog ejection, the blanket of fog will have travelled 6 metres (standard Bandit)
or 10 metres (narrow nozzle Bandit) in just the first 2 seconds alone. Because of this, intruders are
not only unable to approach the unit, they are also forced away out of the protected area in a
matter of seconds.

The BANDIT can also be configured to activate if the system’s connection wires are cut. There are
also built-in “tamper protection” circuits to detect any form of system tampering or interruptions to
power supply. Lastly, the extremely well insulated heat exchanger means that even if mains power
were to be cut, the Bandit would be able to provide a full activation for up to 2 hours from when
power was lost.

What happens if a component, critical to the FOG BANDIT’s ability to eject fog, should fail?

What happens if there’s a fire in the vicinity of the FOG BANDIT?

In the event of a fire in the vicinity of the Bandit a built-in digital temperature sensor prevents the
unit from activating when the ambient temperature reaches 70˚C. Furthermore, the HY-3 fog
cartridge has a safety “release plug” to allow completely safe venting of the pressure and fluid from
the cartridge if the surrounding temperature reaches 95˚ C. The Bandit may also be installed with an
integrated link to the Fire Alarm system, so that in the event of a fire a signal from the Fire Alarm
system can be used to withhold the Bandit from activating.

Is FOG BANDIT an approved product?

Yes. BANDIT has CE approval and is certified to fully comply with European Standard EN50131-8
(which has now superseded the previous British Standard BS7939:1999) together with approvals and
registration for use issued by the Belgium, Dutch and French government bodies.
A copy of the certificate is available on request.